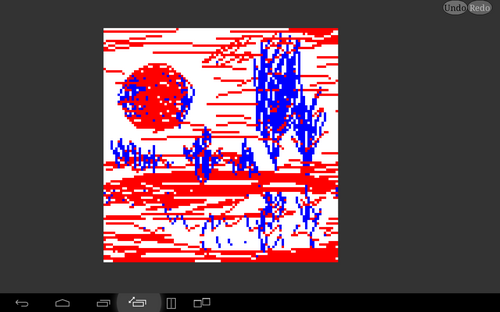 Today I will tell you about where our editor started and why it is looks like that.

The idea of the editor came to me in the year 2013. And it was preceded by the search for a tool and general approach for quickly creating a large number of pixel-art graphics. Yes, with animation additionaly. And even isometric one. The general approach was not found, a survey of friends, who are pixel artists, stated that "pixel art is a long, hard and expensive". Here and there were questions - how much such approach is possible at all and what qualities should an ideal tool for such tasks have?

We saw the following qualities:

This is basics. There were still additional, like "the tool should be cross-platform, so that the artist could use it on any device if necessary" and others. According to the list of requirements it became clear that the vector graphics completely satisfied them. But pixel art is a raster, not a vector! Yes, that's right. But what prevents us from rasterizing vector graphics, adhering to the rules of drawing pixel art? That's right, nothing. This way the editor "Odanako!" was started.

In 2013 I made some quick tests and wrote a technological demo for the desktop and Android. Then editor was put on hold until the fall of 2017.

In the next posts, I'll tell you about the name of the editor, about the development plans and about our team.

Post image shows some pixel landscape drawn by Nata Dunay on the Android tablet using the debug version of the Freehand tool, which the horizontal lines drew in red and the vertical lines in blue.